I would like to thank you for rallying together on here, Facebook and on Twitter in order to help me get 250 votes for Mission Small Business. I surpassed that amount earlier this morning. I can’t even begin to tell you how grateful I am. If it weren’t for you guys, I never would have had a chance.

Murray thanks you too.

My lollipop giveaway is still going on and will be open until midnight tonight. At that point, Toby is going to run a script that will pull out all of my comments, remove any duplicates, and then randomly choose THREE winners. (I upped it to three because I was feeling groovy.) I will announce the winners tomorrow. I’ll also be contacting each winner via email to get your address.

Anyway, I’m throwing some pictures and videos your way as a small token of my gratitude.

Many of you who helped me out are crazy cat people like myself. (Thanks, Lisa! For one!) So, here’s a short video of Elliot and Murray. These two get on very well.

You know, it pains me that people give up their animals (particularly cats) when they have a baby. I know it’s difficult at first, but things fall into place. Trust me, it’s MUCH harder on your pet dropping it off at a shelter than it is if you just have to ignore him or her for a while as you adjust to parenthood. Your pet will forgive you. I swear. If you do hang in there, you will see amazing things start happen between your kids and your pets. Things like this happen. Or this. And my personal favorite, this.

Keep your pets, people! They are awesome companions for kids. We’ve gotten so much joy from them.

Here’s another short video of Em and Elliot on the playground playing in the water. Elliot wasn’t too keen on the water. He’s polar opposite of Emory, who used to let it smash him in the face. Elliot also doesn’t like the feel of grass or sand. I have another video of him screaming for a minute and a half in the sand at the beach.

Emory has been building forts lately. He built one on our couch and then we went for a walk. When we got back, this was happening. (Inside view, outside view.) What a freak. 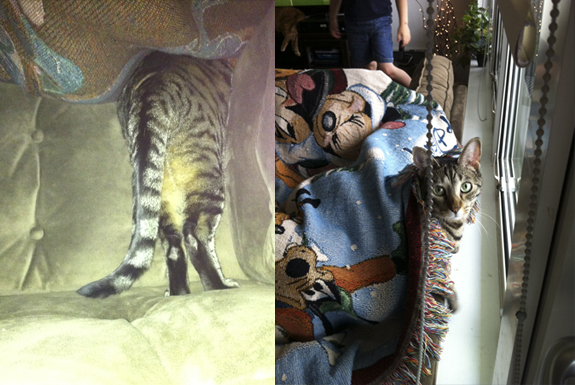 Thanks again for all your help! The grants will be announced on September 15th. Crossing every finger and toe I’ve got.

There’s something sneaky being built into many iPhone and iPad apps. It’s called “micro-transactions”. Some parents have discovered micro-transactions the hard way. Their child was playing with a free app and suddenly they’re charged $60 dollars for a bucket of “Smurfberries”. Yeah, not cool.

There’s a game Em likes to play featuring a talking cat named Tom who repeats everything Em says. He doesn’t play it all that often because it’s annoying as hell for mom and dad, but when he does, we have to keep a very watchful eye on him due to those pesky micro-transactions.

Now, before all you kidless, fur-parents get all high and mighty, micro-transactions are being built into games made for cats, too.

Beware, fur-parents and human-parents alike! Those sneaky iPad/iPhone developers are out to get us!

It was brought to my attention recently that some people believe we have only one cat. And that made me sad. I do realize that I don’t talk about our other 27 cats very much, but they are all loved equally.

OK, that last bit was a lie, they aren’t all loved equally. OK, that’s not true either. We don’t really have 27 other cats. But if I had the space and my husband wouldn’t divorce me for it, I’d totally have 28 cats.

But, no. We have three cats total. And I should probably give them some Internet face-time.

So today instead of going on and on about Murray yet again, I thought it’d be nice to introduce you to his friends. 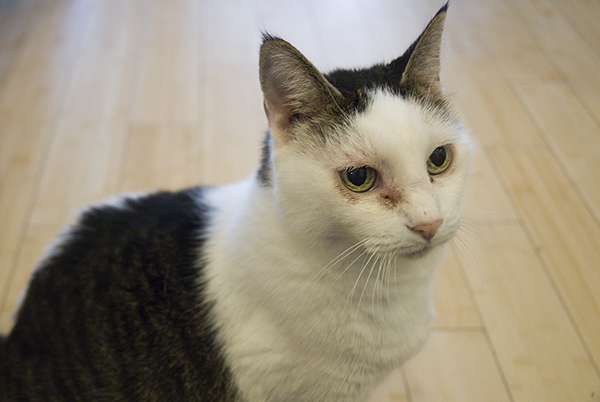 Pookum is a grumpy old lady now. She’s always been a bit on the grumpy side, but now she’s even more grumpy. I think it’s because the boys annoy her. She’s what, like, 90 in human years? All she really wants is to be left alone to sleep and eat and sometimes poop and the boys usually have other plans for her. But she copes, more so with Murray than Tucker. She and Tucker haven’t ever really gotten along. They tolerate one another, but I wouldn’t ever refer to them as friends.

Pookum is now deaf which means she’s loud whenever she meows. And she likes to meow!

Pookum loves drinking out of our water glasses and always has. If you leave a glass of water out and she can reach it, it’s going to be pawed at and licked over within minutes.

Pookum’s real name was Meecha. But early on one of my college roommates named her Miss Kitty Pookums. That was shortened to Pookum or Pook. It stuck.

She was Schmitty’s wife until we adopted Tucker. Then Schmitty decided he was gay and divorced her for Tucker. That was rough. But I think she’s over it now. I also think this is why she doesn’t particularly like Tucker. I mean, who would?

She seems relatively healthy. She eats and sleeps and drinks and meows and loves attention. I’m hoping we have a few more years with her.

This is Tucker, aka The Orangemani Terrorist we have living with us. He is also gay.

Tucker is 8. We actually rescued him from a State College pet store. I know that people frown on this type of animal adoption, but he was going to be put down if he wasn’t adopted and he was one among a sea of dozens, three of which were orange just like him. Why were we in a pet store in State College? Well, I stupidly drove by and decided I had to pay a visit. And there were just so many kittens and dogs! It was rough. Anyway, as we were leaving, Tucker literally velcroed himself to Toby Joe’s ass.

We didn’t expect to adopt a cat that day, but he gave us no other option. We left with an orange cat.

Tucker is kind of sneaky. He’s a sweet cat to humans and unbelievably snuggly, but to other cats he can be sneaky. He loves Murray, but isn’t too keen on Pookum. He’s got the softest coat of fur I have ever had the pleasure of touching. He likes to spoon and purr. Tucker wasn’t always like this, however. He used to be a real stinker. But in his older age he’s mellowed out into a softy.

He sleeps between Toby Joe and my head at night and purrs so loudly, he could wait the feline and canine neighbors.

Tucker cries when he’s upset (like, actually cries). When Schmitty died, he cried on and off for a week. And whenever we brought home Murray (three weeks after Schmitty passed), he cried again. I very nearly returned Murray because of it. Thankfully, I didn’t! Because now they are in love and Tucker is happily remarried to Murray, although Murray definitely goes both ways. He’s kind of a slut.

Tucker got his name because on our ride back to NYC from State College he was tuckered out.

These are my fuzzy friends, the folks that  greet me at the end of my days. They are all very kind animals and I trusted all three of them next to my newborn (now 3-year-old).

I love my cats—all three of them.

We were away all last week, so we had a friend look in on our cats. Midway through the week, I started missing them something fierce. I missed having something fuzzy greet me at the door. I missed the snuggles that come with having a pet. I just missed them. So I decided to broadcast it.

I swear it wasn’t bait, but it just so happens that our friends and cat sitters are also Twitter pals.

Below is the email I got from E.

Pookum got scritches in her favorite place. 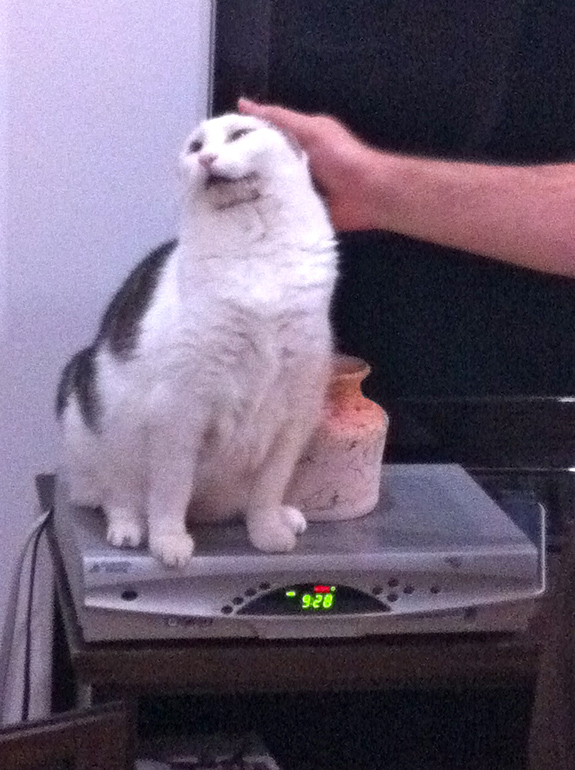 and Murray was outraged that I wasn’t dishing out food faster. 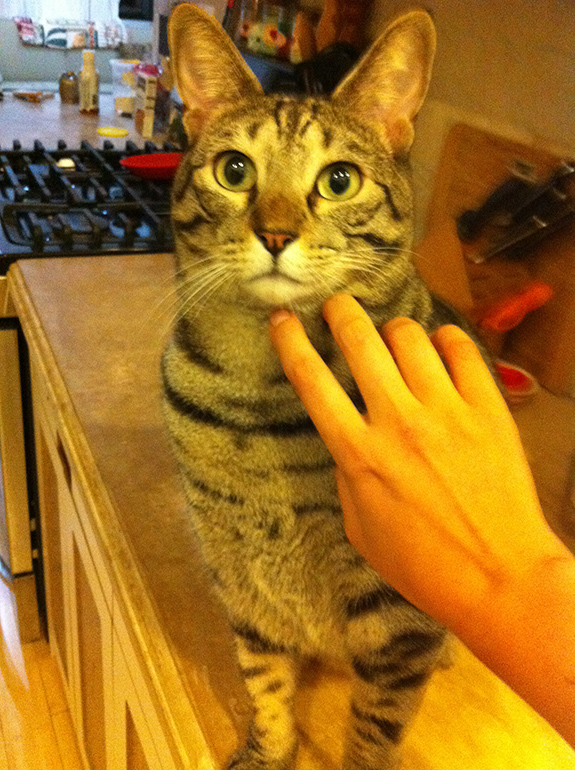 This email had me laughing out loud in a fancy restaurant all the way down in Florida. My brother, who witnessed my amusement firsthand, asked, “What are you laughing about?”

“Look at my cats!” I boasted, tears welling up in my eyes.

To which he replied, “You do realize you have a son now, right?”

And I wasn’t even drinking, people! I’m just a crazy, emotional, pregnant cat-lady.

My boy is starting to look like a grownup!

I have a question for all you cat lovers out there. Murray seems to have flare-ups of ringworm. He had ringworm as a kitten and I figured it was gone for good. But it’s come back three times since. And it’s always in the same place—above his right shoulder blade. (At least I think that’s what it is. The bumps and scabs are the same as they were when he was a kitten.)

What can be done? The topical ointment isn’t an option because it gave him ick-mouth. (He foamed at the mouth. It was terribly sad. We discontinued use immediately.) When he was a wee one, we finally got rid of it using sulphur baths. Do I need to do that? More importantly, does anyone know WHY this is happening to him still? What brings it on? No other cat in our house has it. It just flares up and then goes away. But this bout doesn’t seem to be going away. Any ideas?

What you will need 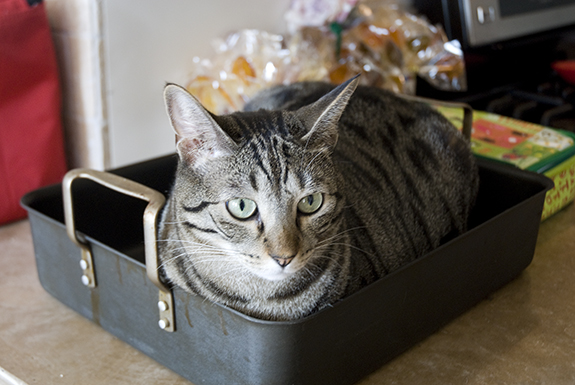 Yell to toddler. Ask him or her if they want “Roasted Myrtle” for dinner. Laughter ensues. Kisses follow. You’re done!

Please note: no cats were harmed, cooked or consumed in the creation of this post. Just kissed and laughed at.

This picture captures a great deal about Murray and my relationship. (It also captures my double chin.) This happens at least twice each day and he almost always drools on me.

Is he a handsome devil or what? This cat brings me so much joy. He’s a happy beast. I wish I could share his snugs with everyone. But Emory might not give him up. Mama definitely won’t.