Elliot is a little over 4 weeks old. Things are going well. He sleeps relatively well at night. I am not a zombie in the morning. He wakes up about three times from 8 PM until 7 AM and that’s totally doable. It helps that I’m breastfeeding AND co-sleeping (JUDGE AWAY!) because when he wakes, I roll over, stick a boob in his mouth and fall back to sleep again.

The problem I’m having takes place during the day. He doesn’t like to be put down, like, at all. He lives on my body. And, yeah, that’s freaking adorable. I love baby snuggles. But I have a 3-year-old to care for. I also have laundry to do and a job. And sometimes it’s nice to be able to clap, write an email, or use the toilet. I can’t hold him ALL the time. 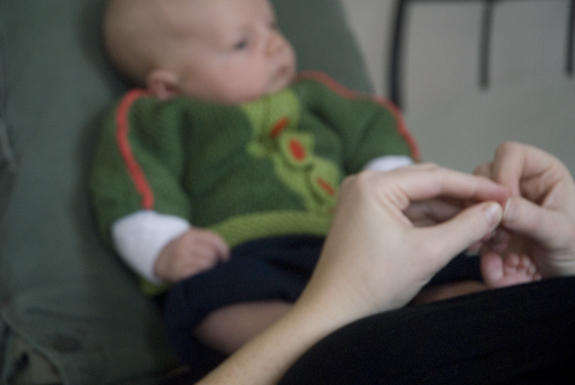 Granted, right this second he’s sleeping soundly for the first time in his infant car seat. And has been for about 30 minutes. (!!!) So maybe things are changing. I’m not sure.

Let’s say this is some freak event and things go back to what they’ve been for the last four weeks, what do I do? I am not comfortable with letting him cry; he’s far too young for that. But I’m open to other ideas. Anyone? Did anyone have a newborn like this? Does it pass? What did you do to help things along? Are there slings that won’t suffocate him? Slings I can easily wear around the house? I purchased an Ergo and while I think it’ll be awesome when he’s older, you have to be a freaking yoga instructor, or, you know, smart to put the bloody thing on. I haven’t had any luck getting him into it and feeling he’s safe once in there. I didn’t have any luck with Emory either, that’s why we stayed in for the first two years of his life.