Seven days ago while listening to the WTF podcast featuring Adam Ferrara, I learned something about real estate and religion. Adam Ferrara shared a story from his childhood about how when they were selling their home on Long Island, his mother made his father bury a statue of Saint Joseph in the yard. The belief is that this will make the house sell quickly. When their house didn’t sell right away, his mother mentioned it to her priest, and the priest asked, “Well, did you bury him upside down?”

That night, his mother made his father dig up Saint Joseph and bury him the “right way”. And the house sold.

I was raised catholic, and I’d never heard of this before. I found it odd, of course. (And a little cute, because superstitions are always a little cute.)

We bought this house last September. It’s a bit of a money pit. But I am told most 100-year-old houses are. It’s constant upkeep. Things go wrong. Stuff breaks. Leaks happen. Roofs rot. Gutters fall off. Bathrooms need updated, as well as kitchens, and basements. Doors and walls are covered in lead paint. The floors creak and moan. There is just so much to do when one buys an old home. They’re temperamental. But they’re also damn sturdy and have unique personalities.

We were in a bit of a rush when we bought this house. Emory was to start private school in Brooklyn. We had already put down a $4,000 deposit on his tuition and had another $10,000 due immediately. When I found out I was pregnant with Walter, and knew we couldn’t raise three boys in a 900 square foot apartment (or pay for private school), we hit the ground running. We figured if we found something fast, we’d save the $10,000 on Em’s school tuition and instead use that toward a home.

So, that’s what we did. And to some degree we settled. This is not the home we would have purchased had we not been in such a hurry. It needed more work than many other homes. It had been neglected for decades. It was sad. I described it as perpetually sighing. Toby suggested it had been lived in by the chronically depressed. But we got a pretty OK deal on it due to all that stuff.

We’ve done a ton of work on this house since September. We are therefore quite broke.

In order to save money we don’t have, we do whatever we can ourselves. A lot of that includes cleaning up and fixing the yard. And since the outside of the house was neglected as much as the inside, there is a ton of yard work to do. The bushes out front are scraggly and pathetic looking. They are skeletal even during the plush summer months. They are surrounded by weeds the size of small trees. And the grass out front is a joke. It’s 90% weeds, 10% crab grass. The ivy looks like massive piles of unkempt yard pubic hair. It’s just awful.

I usually do whatever I can while the baby is taking one of his 30-minute naps. (He’s not a napper!) I will venture outside and quickly dig up some sad bush. It’s slow-going, and a ton of hard labor, but it’s kind of fun getting lost in thought and covered in an organic filth other than poop.

This morning, while hacking away at one of the larger bushes, I unearthed this fella: 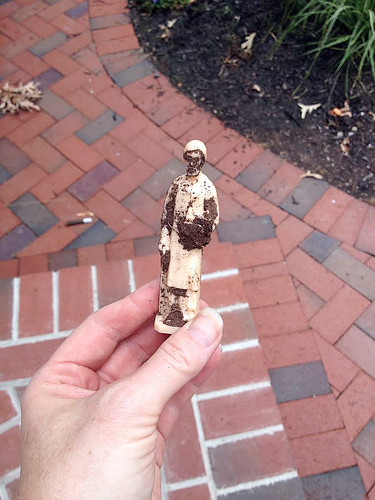 This is him after a quick bath: 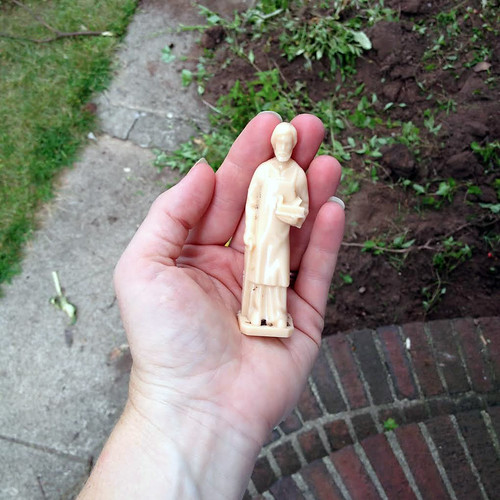 I don’t find it all that odd Saint Joseph was left here. I gather this happens often enough given how many Catholics there are in the world. The weird part for me is, had I found this fella, say, 8 days ago—prior to listening Adam Ferrara tell his story on WTF—I’d have tossed Saint Joseph aside believing him to be another long lost children’s toy (of which we’ve found several).

No. It’s not the existence or the discovery of Saint Joseph I find all that strange. It’s the coincidence of how quickly the order of life events stumbled into one another, unfolded before me. That is the weird part. That’s the part that rendered me still.

These are the type of occurrences that always make me feel giddy about being alive. I look for them all the time. I cherish these strange coincidences that make me pause and mutter the words, “Huh. Well, that’s weird.”

But, what do I do with him now? Do I bury him again? Do I save him and bury him when we try and sell our house in the future? Or, do I free him from the earthworms and the soil? Has he done his job? Goodness knows this was a difficult house to sell! Do I send him on his way?

Will someone find him and bury him before he even gets to see another sunrise? 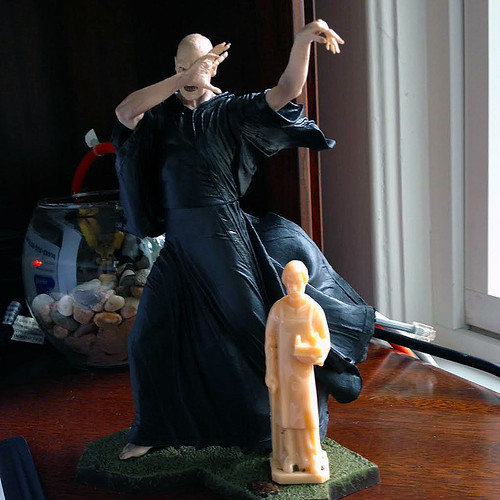 What do I do with Saint Joseph now?