I ran 8 miles on Saturday. I’m getting a touch worried as to how I’ll eventually find 13-20 miles in this small town. Finding 8 was hard enough. I’m not a fan of looping back. I know that’s probably pretty silly. I don’t mind running the same routes every week. But I don’t like looping back during the same run. Weird.

Actually, finding 13-20 miles isn’t difficult if I run up the mountain. Which gives me a great big HAHA! right now because I can barely walk up that damn mountain. It’s freaking steep and very long. But eventually, I’ll have to. I’m hoping by then hills and/or mountains won’t frighten me as much.

The run was fine overall. But AGAIN with the belly issues. Midway through mile 5, I started experiencing gut pain. So, I ran/walked, eventually pausing RunKeeper until I found an outhouse/porta-john near the baseball field in Maplewood park. And HOLY COW, this was BY FAR the most disgusting public bathroom I’ve ever used, prompting me to leave the following note in RunKeeper: 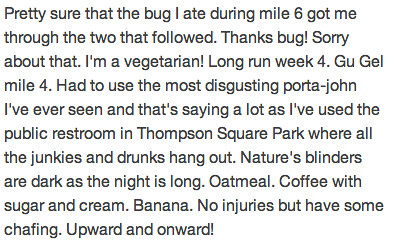 Anyway, I was so relieved to find an open toilet, I didn’t give a shit (OR DID I?) what it looked like. (God, I am an awful, vile human being. I can’t wait to see how many people I disgust with my nonsense, namely my husband who, should he read this, will wish to avoid me indefinitely.)

That was the only hitch, the only stumble. Overall, it was a great run.

I’ve noticed that my long runs feel better mentally than the shorter ones. I think it’s that I go into them knowing I can (and should) walk a bit. I know that I’m going to be out there for a while, so I just commit. I get lost in thought, listening to whatever podcast. And then, before I even realize it, I’m halfway done. That doesn’t mean the long runs are easy! It’s just that they’re easier to commit to and embrace than my weekday maintenance runs. Maybe that’s because of how early I have to get up during the week in order to train. Maybe it’s because I know that once I return home I’ll have to get three kids ready for the day. That stress looms. Whereas on Saturdays, it’s not a big deal if I get home after 8 AM and all three kids are still in their PJs watching cartoons. Incidentally, the idea of training once school starts up, and everyone needs to be somewhere by a certain time and it coincides with when my weekday runs become longer and longer, that just makes my head spin. I’ve no clue how we’re going to manage that.

That’s the thing about training for a marathon, much more so than a half: it’s a part-time job. And everyone is affected by the amount of time involved. I’m asking for a great deal of patience and understanding from everyone in my family. Granted, I hope my boys can learn something from this as well. But we’ll see.

Route: Down past the Duck Pond in South Orange, right into the neighborhood, past Mountain Station. Down Valley all the way to where the nursery is. Took a right there and then another right down Salter. Through park. (Hit another outhouse in the park) continued on back through town and then up Virginia onto Ridgewood and home again.

Time and distance: Average 11:23 minute miles with miles 3 and 7 being the fastest.

Personal Stuff: Bellyaches during mile 5. Getting sick of this. Also: It seems I’ve put on weight this week, but I haven’t eaten poorly. I’ve eaten more, but that’s because I’m burning more and therefore craving more. I put on almost 2 pounds. I’m sort of hoping that has to do with recovery and muscles. I remember this happening while training in the past as well. I’d GAIN weight the day or two after my long runs and then things would even out again three or four days later. Wondering why this is. Hoping that’s the case, because I don’t want to gain weight. I want to weigh 140 by October. Finding a balance between the ravenous hunger I have after my longer runs and what I actually eat is going to be key.

Cons: Belly issues and I ate a bug. :[ The sound on my iPhone is dying.