My kitty died on Thursday. And I’m heartbroken. She was around 21-years-old. She lived with me for two decades and I feel an emptiness that is indescribable. I keep going through the motions of having her here, because she’s always been here. But now she’s not here and every time I realize this, I lose my breath. 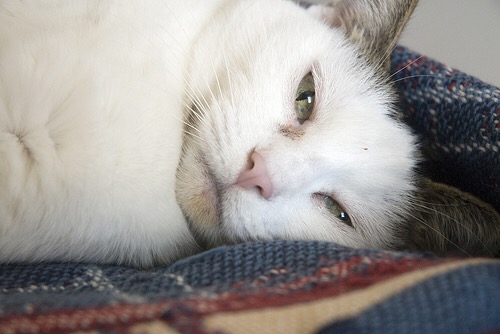 She always drank from our glasses. So you had to be careful not to leave them out. And if you did leave your glass unattended even for just a minute or two, and she was in the room, that glass was hers. She lost her hearing six years ago. And her eyes were failing as well. But dammit if she couldn’t zero in on an unattended glass of water. And so yesterday, whenever I went to have a sip of water from the glass I’d forgotten about, it occurred to me that she hadn’t had a sip from it, that she would never sip from my glass again.

When it comes to losing pets, why do we often mourn the little irritating things the most? Why do their annoying qualities become the exact opposite when they’re suddenly gone?

I’d have given anything to have had to refill my glass yesterday.

This morning I got up, walked downstairs and filled four bowls of food. I immediately burst into tears. We only need three.

I read once that it’s not polite to leave chopsticks in a bowl of rice at a restaurant because this is used as paying homage to the dead during funeral ceremonies in Japan. I’m not sure if that’s true, but for some reason it crossed my mind as I left the bowl full of food for her.

I’m 40. And this hit me pretty hard on Friday. I thought about all the places she’d been, all the cities she lived. I thought about all the apartments she moved into with me, and then finally, this home. I thought about all those times she would set off my alarm clock—the black kind we used in the 90s. You know, the ones with the hideous blaring alarm that not one person on planet earth could have slept through. She used to jump up onto that thing and walk all over it until the radio turned on and I was forced to get up and feed her. She must have been so sad when smartphones took over.

I was thinking about how she was born before cellphones existed and in a lot of ways life was much simpler. Back then we paid more attention to the creatures we shared our days with. We weren’t staring at screens, choosing to tweet some bullshit about some other bullshit instead of leaning in for another headbump.

I miss my cat.

And I guess I miss a little of me as well.

(RIP My sweet girl. And if for some reason there are still old school alarm clocks in pet heaven, I hope you’re tap dancing all over them. And I hope that if I listen really closely, I’ll get to hear it.)